Amorgos, Naxos and Paros: wildness in the Cyclades

CUSTOMIZE YOUR TRIP
Greece like a local > Our trips to Greece > travel > Holidays in Greece > Amorgos, Naxos and Paros: wildness in the Cyclades

AMORGOS, NAXOS AND PAROS : WILDNESS IN THE CYCLADES

This itinerary goes through the following steps:

3 islands as a proof of the greek diversity and beauties

This is a trip to three of the Cyclades islands. They are not the most commonly frequented islands and offer three contrasting profiles. Amorgos is difficult to get to but its stark mountain sides offer a rugged beauty. The biggest island, Naxos, is stunning with fertile valleys, marble quarries and large sandy beaches. Paros has been the most successful in preserving a traditional way of life. Reaching these three islands by sea will give you the opportunity to take a short cruise round the Cyclades.

N.B : Contact our greek specialists so they can customize this itinerary and adapt it to your needs and wishes.

Here is the list of hotels for your travel in Greece:

In Amorgos:
HOTEL VIGLA
Excellent value for money
A basic but friendly family hotel in an extremely peaceful location. Its white exterior is in keeping with the wonderful surrounding villages, Tholaria, Langada and Potamos. The hotel is located at the entrance of the village of Tholaria, on the hills of Aegiali, 2.5 kilometres from the harbour. The 25 spacious and bright rooms are spread across three buildings. They all have bathrooms with a shower, air-conditioning, balcony, telephone, hairdryer and refrigerator, satellite TV and wi-fi. A very pleasant restaurant with an outdoor terrace offers a panoramic view across the Aegiali Bay.

AEGIALIS LUXURY HOTEL&SPA
Drawing much of its inspiration from the Big Blue, this hotel plays on shades of blue and white. Its Cycladic architecture means that it blends in perfectly with the countryside. It is exceptionally located between Aegiali and Levroso, the two most beautiful beaches on the island. A ten-minute walk from the sea, on the hillside and with a spectacular view over the bay. The hotel is divided into five buildings and forty-nine rooms with a terrace or balcony overlooking the sea. The superior rooms are larger than standard rooms. They are tastefully decorated and include a bathroom with a bath, telephone, satellite TV, minibar, air conditioning, safe, internet access and a hi-fi system. The exclusive rooms combine luxury with state-of-the-art technology and include a King size bed, a spa bath, a flat-screen TV and DVD player, not to mention an unrestricted view over the bay. Sea water outdoor pool overlooking the bay. Lounge bar with pool table and games.

In Naxos:
HOTEL GROTTA
Excellent value for money
Overhanging the city of Naxos, Hotel Grotta offers a breathtaking view over the city and the Aegean Sea. It is a family hotel suitable for a clientele seeking comfort combined with authenticity and friendliness. Excellent value for money for a charming little local hotel, open all year round. Twenty-two basic but pretty, very well-kept rooms. All are equipped with TV, telephone, hairdryer, air-conditioning, small refrigerator, bathroom with shower.
Large interior spa bath. A five-minute walk to the north of Hora and one kilometre from Saint George beach.

LAGOS MARE
Luxury hotel
This luxurious boutique hotel is one of the finest and best known on Naxos island. Built in 2006, the Lagos Mare is a new, comfortable hotel, in a somewhat secluded location 500 metres from the beautiful Agios Prokopios beach and 3 kilometres from the village of Hora.
The twenty-eight rooms and ten softly-coloured suites are spacious and fully equipped with a flat-screen TV, anatomic mattresses, hydromassage, high-speed internet connection, minibar, safe, air conditioning and telephone. Moreover, the superior category rooms are equipped with a CD/DVD drive, a private hammam in the bathroom, and a balcony with a sea view.
Swimming pool. Spa bath, sauna, gym. Swimming pool for children, playground, games room.

In Paros:
MANOS HOTEL
3-star charming local hotel
The Manos hotel is a traditional hotel, in typical Cyclades architectural style with its whitewashed walls. In the very centre of Naoussa, a five-minute walk from the beach and from its exceptionally picturesque harbour from which you can also set off to explore neighbouring islands. It is surrounded by gardens which reinforce its warm family atmosphere. The twenty-eight rooms all have a balcony or terrace, are air-conditioned and equipped with satellite TV, telephone, refrigerator. Swimming pool in very pleasant surroundings.

SAINT ANDREAS HOTEL
4-star charming local hotel
Saint Andreas hotel is located to the north of the island, 1.5 kilometres from the town of Naoussa. Close to the Kolymbithres beach. This family hotel stands out for its quality of service and its cuisine. Since the 16th century, the family has also owned the neighbouring eponymous monastery. Fifty-six modern rooms and suites offer you the comfort you would expect from this kind of luxury hotel. Five types of room: Double, junior suites, suites and maisonettes. Can host two to four people depending on room type. The rooms have a view of the sea, the gardens or the pool.

Piraeus – Amorgos crossing
- By ferry: between 8 hours 30 minutes and 9 hours 30 minutes depending on your destination (Aegialis or Katapola harbour). It is possible to book a cabin. Late night arrival (around 2am). Daily in high season
- By hovercraft: Nowadays there is only one hovercraft which takes almost as long as the ferry (7.15am-2pm) but above all it is not safe and reliable and we therefore strongly advise you not to take it.

Amorgos – Naxos crossing
- By ferry: Between 3 and 6 hours travelling depending on the company and place of departure. Daily, twice a day.
- By hovercraft: 3 hours 30 minutes, rather infrequent and not much faster.
In general, they call at some of the small Cyclades islands

Paros – Piraeus crossing
- By ferry: 4 hours 15 minutes, at least twice a day.
- By hovercraft: 3 hours, with 1 or 2 per day in high season
- Plane: 1 to 3 per day according to the season, flight time around 45 minutes. The planes are small and are often booked up well in advance.

Highlights of the travel in Greece:

Our advices for this travel in Greece:

In Amorgos
- Make the most of the peacefulness and magnificent beaches. Worthy of note is the Agia Anna beach where the film “The Big Blue” was shot.
- Go hiking along the numerous paths which cut across the island through wonderful countryside.
- Visit the monastery of Panagia Chozoviotissa (11th century) built on the cliff side. Fine sand or pebble beaches.
- There are also several archaeological sites to discover.

In Naxos
- Stroll through the maze of narrow streets and spectacular staircases in Chora, the island’s "capital" perched at 400 metres above sea level at the foot of a massive rock.
- Admire “Portara”, a huge marble portal at the entrance to the harbour.
In Chora, visit the ruins of its 13th century Venetian castle, as well as over sixty surrounding villages, many of which are inhabited.
- Try out all the beaches, from Aghios Georgios to Plaka passing through Aghios Prokopios, each more beautiful than the next.
Hikers will be attracted by the range of hiking paths which snake through olive groves, orchards, Byzantine churches, with the sea always on the horizon. Not to mention the beautiful countryside, of course.
- Set off on a mountain bike trail along way marked paths.
- Take a mini cruise to neighbouring islands on a sailing ship: Koufonisi, Irakleia, Amorgos, Santorini…
- Take advantage of the wide range of watersports and scuba diving.
Visit Apiranthos, a village built on the mountainside 650 metres above sea level. This is probably one of the most picturesque villages on the island with its narrow alleyways tumbling down the mountainside.
- Sample Naxos potatoes as well as “graviera”, a kind of local gruyere cheese.
- Visit the distillery and sample the various types of local Kytros liqueur in Chalcis.

In Paros
- Lounge on the beautiful Logaras beach, 400 metres of sand and shade beneath the tamarix. Nature lovers and watersports enthusiasts may prefer the Tsoukalia beach, located to the north-west of the island.
- Visit the church of Panaghia Ekatontapiliani, the famous “Church of a Hundred Doors”.
Visit Parikia’s Venetian Castro, Naoussa’s Byzantine churches and the monastery at Longovarda.
- Take a hike through the “Valley of Butterflies”.
- Visit Naoussa and its harbour, one of the most beautiful in the Cyclades.
- Go on one of the many hikes starting from Lefkas and taking the famous Byzantine path that links up all the little villages.
- Cross the stretch of sea to visit Antiparos, the neighbouring island where inhabitants have not lost the real meaning of hospitality.

Have an amazing experience in Greece!

Request a quote on this program

Other travel suggestions in Cyclades 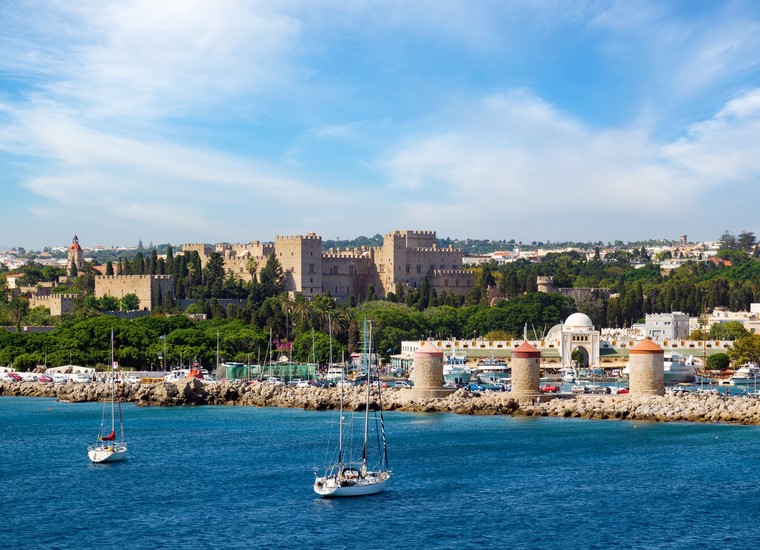 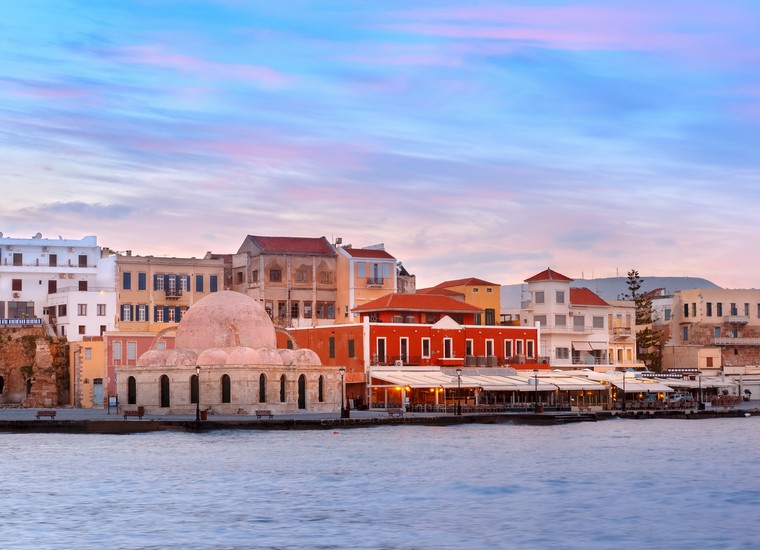 At the crossroads of cultures: discover Chania 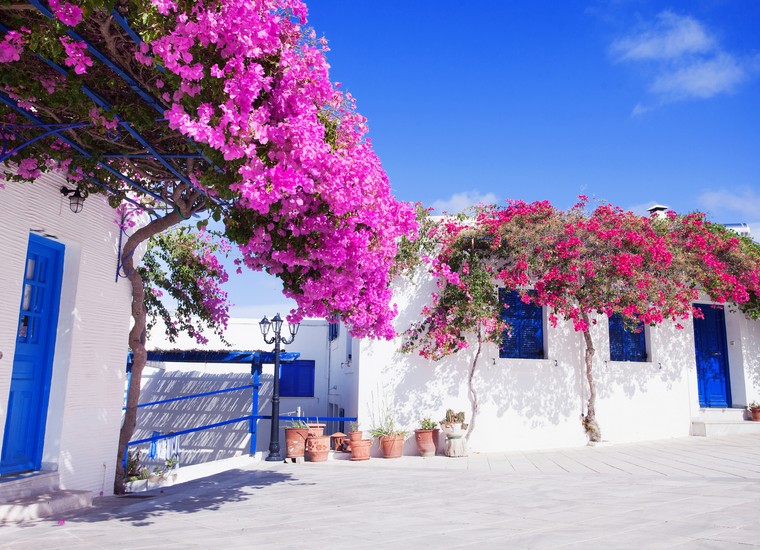 Paros, at the very heart of the Cyclades
TRAVEL AGENCY DIRECTLY WITH LOCAL SAFE !

Pioneer of the destination